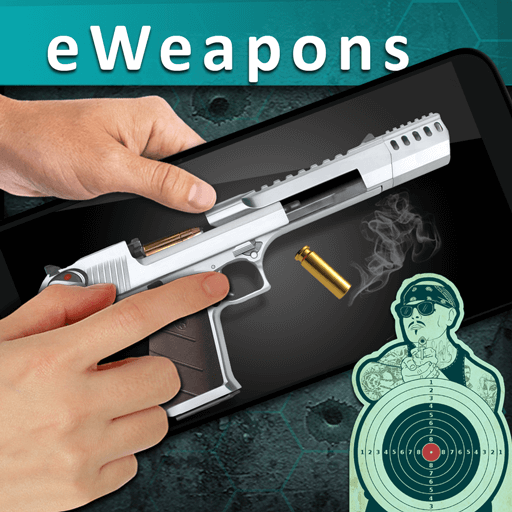 Start your guns journey through the world of guns with the eWeapons Guns Weapon Simulator. If you love playing gun games and shooting ranges, you will fall in love with this weapon simulator. With this gun simulator, you will have modified simulations of some of the most famous weapons and guns in the world. eWeapons™ Guns Weapon Simulator is an app with realistic sound effects and a big selection of some of the most popular guns. When you see the visual effects of this firearms simulator and a gun app, we are sure that it will become your favorite way to entertain yourself every day and one of your favorite gun and e weapons shooting games.

This is surely one of the most amusing gun simulator games which offers a unique experience to everyone who enjoys shooting. In this particular gun simulator, which is also a revolver simulator and a machine gun simulator, you have a variety of weapons such as: revólver, rifle, pistola, machine gun, which look just like their real world counterparts. All the
e weapons in Guns Weapon Simulator by eweapons are interactive and unique, which means you can fold stocks, cock the hammer, adjust the fire select, load magazines, discharge and many other actions. This gun app and a revolver game is perfect for those who would like to learn how to handle a pistol, a revólver, a machine gun and many other firearms while being completely safe.

You will be fascinated with all the e weapons in this gun app, especially the revolver. Revolver is one of the most popular weapons in this game and it represents a repeating pistol that utilizes a multi chambered revolving cylinder behind one barrel. The early versions of the revolver are also known as “pepperboxes” and they consisted of multiple barrels in a single cylindrical unit that revolved around a central spindle. With this revolver simulator, you can truly experience all the advantages of a revolver in a completely safe environment.

eWeapons Guns Weapon Simulator is one of those gun shooting games where you will feel like you are holding a real pistol in your hands and when you hear the gun sounds, you will get the impression like you are in a real shooting range. Get the best modified simulations of guns like sniper, shotgun, submachine gun or assault rifles and revolver right in your phone. Go ahead and find out why this app is one of the best gun simulator apps on the market. With eWeapons™ Gun Weapon Simulator, some of the best guns in the world will be right there in your pocket. It is very easy to play and the feeling you will get is amazing, so choose guns you like the most, pull the trigger and one of the best weapon games can start.

Inside the eWeapons™ Ultimate Weapon Simulator app, you have a possibility to play a fantastic mini game – shooting range game. We have prepared for you a gun shooting range game. This is a first person shooting game where you select your weapon, shoot targets and pass up to another level. You will definitely enjoy this FPS game, which will make you feel like a professional shooter.

Copyright © 2022. All rights reserved. Designed and developed by GravityCode.